The airplanes, artifacts, and archives of the Royal Aviation Museum of Western Canada are all packed up and safely in storage. It was a major undertaking (to say the least) and could not have been completed without the museum’s employees, volunteers, and many friends who stepped in to offer space and services. We thought we’d share a bit about the process and where everything will be housed for the next 18 months.

The museum’s inventory was dispersed to aviation firms around the James Richardson International Airport’s campus and to six locations outside of Winnipeg. The museum’s compound near the St. Andrew’s airport was a major storage destination, and with the exception of the aircraft in the Bush Gallery, the museum was packed up and out of Hangar T-2 by October 31, 2018. The Bush Gallery was a bit more of a complicated process, and those planes were moved by January 2019.

With the largest item being the Vickers Viscount (a 48-passenger commercial aircraft) and the smallest, being packages of tiny nuts and bolts in the restoration shop, the scope of storage needs facing the museum team was huge. Lorne Roder, the museum project manager who directed the museum’s exit from Hangar T-2, said that the unique nature of items and the varying characteristics of each storage offer made it necessary to customize the acceptance of these offers in an equally unique way. For example, the fabric-covered aircraft needed to be stored inside a hangar; the largest of the museum’s airplanes needed a safe outdoor parking space; and other archival material, such as the library and archive holdings, needed dry and temperature-controlled facilities.

Museum management initially hoped to slowly move all of the contents of the museum to a single location; however, it soon became evident that this would not be possible. Thus, the search for storage locations began. Once word got out into the aviation community, the museum’s appeals were matched by unsolicited incoming offers to help. Here’s where the major components of the museum found temporary homes: 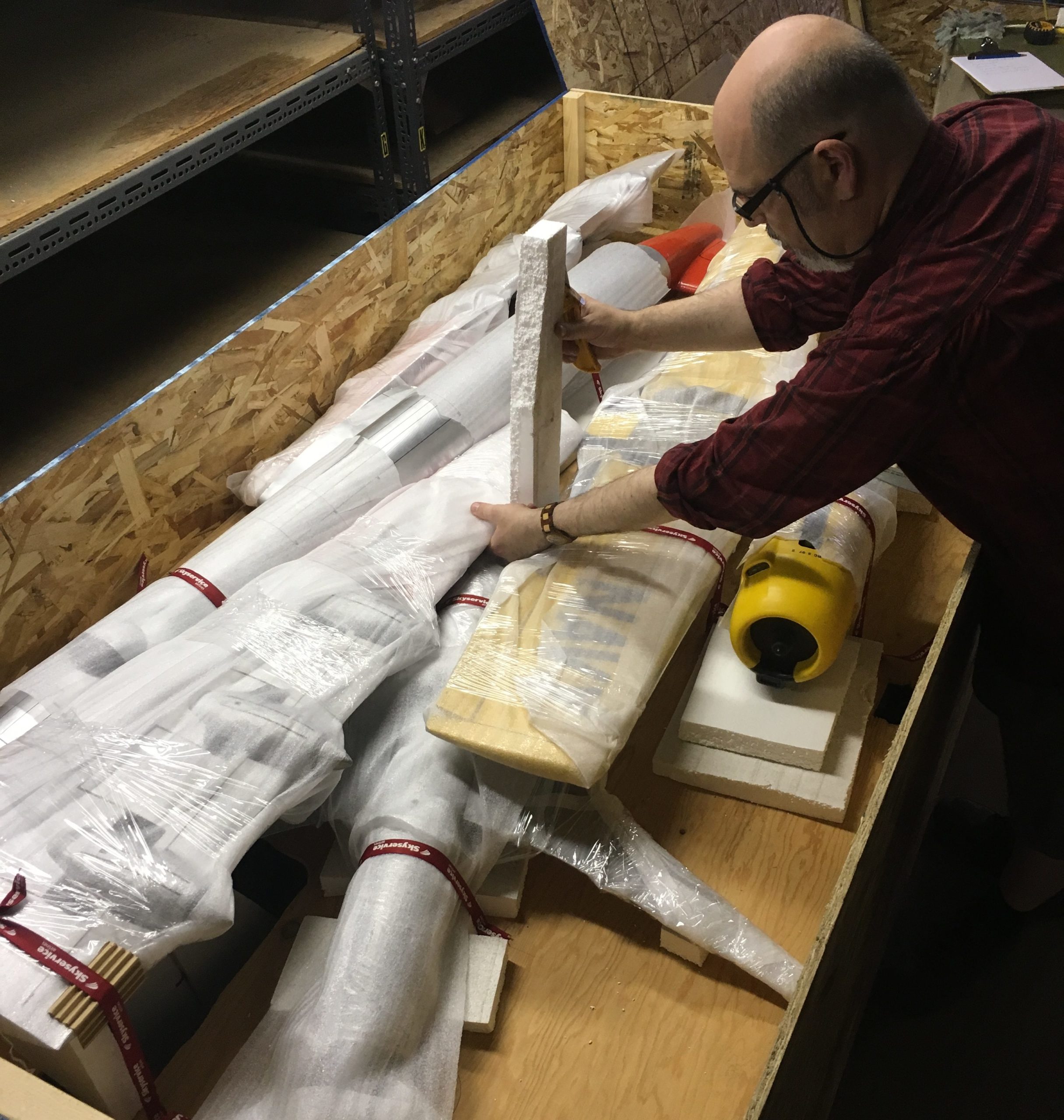 Packing up some of the museum aircraft models

All of the books, magazines, artwork, blueprints, and historical personal papers are now in the care of Magellan Aerospace in an area that is temperature-controlled and behind its security perimeter. The non-paper artifacts in the library and archives collection (cockpit instruments, gyros, blowpots, etc.) are in semi-trailers at the St. Andrew’s compound.

Everything in the restoration shop was packed up and taken to the St. Andrew’s compound. The compound is providing secure storage for items that do not require a controlled environment, such as displays from SkyWays (the youth educational display area), items from the gift shop, furniture, shop equipment, and a wide range of other items from the museum’s nooks and crannies.

Where did all the planes go? 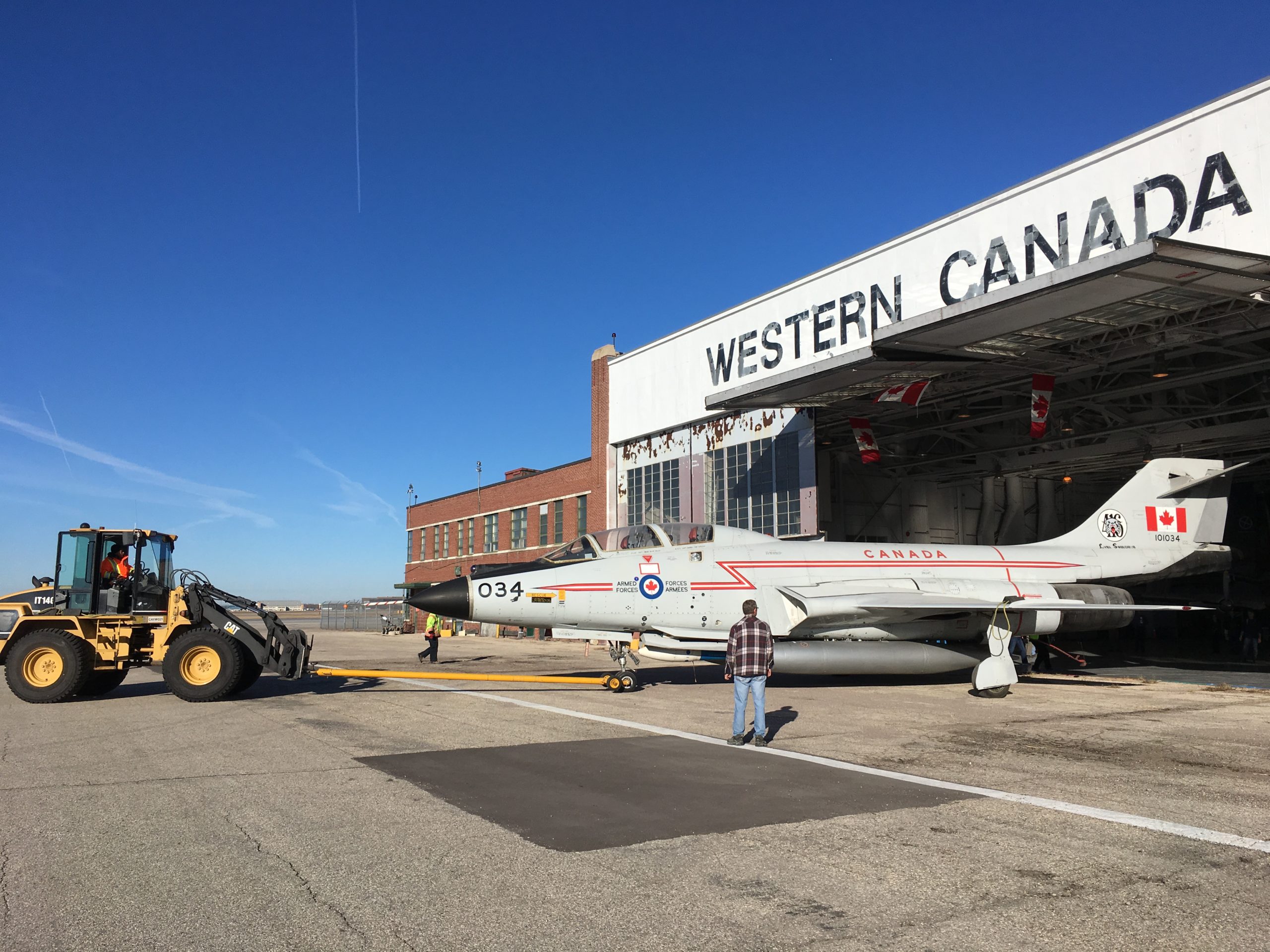 The aircraft were transported to storage sites in three directions — north to St. Andrew’s, Stonewall, and Gimli; west to Brandon and Portage la Prairie; and east to Lac du Bonnet.

St. Andrew’s Airport: The Benson gyrocopter and the Black Brant replica are in the museum compound at St. Andrew’s. Ross Robinson, a long-time museum supporter, offered space for the North American Harvard in his hangar at St. Andrew’s. Brian Hawes, former owner of a helicopter charter firm, offered his heated hangar at St. Andrew’s, which was large enough for the Canadair CL-84 (the Dynavert), the under-restoration Razorback, and the largest items in the scale model collection.

Stonewall: Devin and Kristin Long in Stonewall took the De Havilland Fox Moth and the large scale model of a Hercules boxcar into their unheated hangar.

Gimli: The Schwitzer glider is in storage at the Air Cadets Hangar.

Brandon: The Commonwealth Air Training Plan Museum (CATPM) became the keeper of the De Havilland Tiger Moth and the Auster. Since both aircraft were used in the Second World War training program, they make an excellent complement to the CATPM’s aircraft collection and mandate.

Portage la Prairie: The fuselage, wings, and related parts of the Bellanca Aircruiser are in storage at Southport Aerospace Centre.

Lac du Bonnet: The Waco YKC-S and related parts are in storage in a heated facility arranged by one of the museum’s founders, Gordon Emberley.

Near the airport in Winnipeg:

Firms around the Winnipeg airport generously offered interior heated hangar space to protect the fragile fabric-covered aircraft, as well as outside parking space for airplanes able to withstand the elements.

Air Canada provided interior hangar space for the Vickers Vedette, the Stinson Reliant, the Fairchild 71, and the Fairchild Super 71. The Vickers Viscount is parked on the tarmac outside the Air Canada hangar and is a storage container in its own right — many of the small scale models in the museum’s collection were carefully packed into boxes and then stowed on the seats inside the Viscount where they will be safe.

For the most part, the museum covered the cost of moving the aircraft to their locations outside of Winnipeg, something that ensured that the aircraft would be loaded, moved, and unloaded with appropriate care. The Commonwealth Training Plan Museum went a step further, with its director, Stephen Hayter, organizing a team of volunteers and the necessary transport to move two airplanes to Brandon.

Finally, employees at the museum’s temporary offices at 29-313 Border Street are sharing space with scores of storage boxes. Some of these boxes hold unique and delicate objects that the museum team wants to protect, while other boxes contain archival resources that will be used to develop the exhibits and programming for the new museum.

The board of directors and employee team are grateful for the support of the aviation, aerospace, and transportation community during this transition period. We also applaud the tireless work of the volunteers who ensured that the museum was ready to exit Hangar T-2 on October 31, 2018. Many of them increased their hours and days at the museum, and this could not have been done without them. Strong leadership is always required to see through such a large, logistical process, and the board along with Helen Halliday, president and CEO, thank Lorne and Joel Nelson for leading this Herculean effort.