The roar of the engine of a T6 Harvard was filling the sky while it was flying loops high above the neighbourhood. On the ground, a young boy ran to his grandfather’s house, grabbed his binoculars, and somehow managed to climb onto the roof to look at the plane. As he was laying there for hours, his mind was transfixed in amazement while looking at that flying machine and the pilot commanding it.

And so started a lifelong dream in this boy’s mind to become a pilot one day. However, finances and social circumstances would prevent him from becoming a real-life pilot. However, the amazement and awe for those great machines never died.

As time went by, he realized that he had a natural inclination towards technology and anything to do with machines. He learned the skills to work with tools and materials. It didn’t take long before he built his own creations at his grandfather’s workshop.

It was only natural that he enlisted in a vocational school, where he learned about electricity and the laws of physics, which he found to be fascinating. He was introduced to electronics and circuitry. He read books about it, studied it, and soon started building his own electronic circuits.

One day he walked over to another class, and for the first time in his life, he saw a computer and watched in amazement how these students were programming them. He knew he needed to learn that as well. And so he did. In fact, he spent years at the University learning how to program them and make them do what he wanted them to do. The enjoyment of being able to control that machine reminded him of those pilots in the cockpits of the T6’s controlling those metal birds.

He also spent countless hours reading about how planes work, their systems, aerodynamics, instrumentation, and anything he could get his hands on related to aviation. The internet and personal computers were becoming normal household terms.

Around that time, the first flight simulator software was being launched. He thought to himself, if I can’t get into a real cockpit, maybe I can get the cockpit to come to me. And so he started building his first flight controls and put them in front of a big CRT monitor, pretending he was flying a real plane.

Decades later, and after having built countless simulated cockpits, my dream of sitting in a real cockpit is still as strong as it was when I was laying on the roof of my grandfather’s house.

One day I was walking through the halls of a flight training school and noticed an instructor teaching a student pilot about IFR on a simulator. To my amazement, they were using the same software I had been using for years to “teach” myself how to “fly.”

In that moment, it was like all the seemingly isolated pockets of knowledge about computer programming, electronics, skills with tools, and a passion for aviation converged their paths into a single idea: I can finally build my own realistic cockpit!

Technology had finally caught up with my dream. The wooden pretend cockpits were not good enough anymore; I wanted the real thing. And so I set out to find my first air-frame, which I found sitting on a field in rural Manitoba. I bought it, cleaned it, and started building my cockpit that would interface with the simulator software I had been using for years.

I took old hardware and flight controls that had been discarded by flight schools, put in my own electronics, and made it work with the simulator software. I programmed the electronic boards so I could switch on lights, start the engine, throttle the engine, and drive the instruments on the panel. All of this inside a real Cessna cockpit!

As I was digging deeper into the software, I found other enthusiasts that had developed ways to download satellite imagery from the internet so the outside scenery would look as real as possible. Roads and rivers, cities and neighbourhoods, grass airstrips, and big airports all can be seen and flown over.

Soon, I met real-life pilots that were willing to come over and help me fine-tune the simulator so it would “feel” like the real thing. One of them ended up enjoying it so much that he gave me his old twin-engine TravelAir frame so I could convert it to a simulator.

The same flight school where my dream had started to take shape later hired me to work on an old Frasca Seminole simulator. The simulator had been sitting unused in storage as it could not work with the newer technology needed for flight training.

Armed with my experience I set out to convert it, and after three months of work, it is now back at the school being used by students and waiting for re-certification by Transport Canada.

I have met many interesting people during this journey. Business jet pilots, F-18 pilot, GA pilots, 10-year-old kids, and their dads sat in my “pretend” cockpit, and we have shared good times and laughs after bumpy landings or an out-of-control stall.

Many times when I am sitting inside one of my simulated cockpits and “fly,” I think of how fortunate I have been. When I fly over the synthetic neighbourhoods, it is as if I can see that boy laying on the roof of his grandfather’s house looking up with his binoculars and smiling. 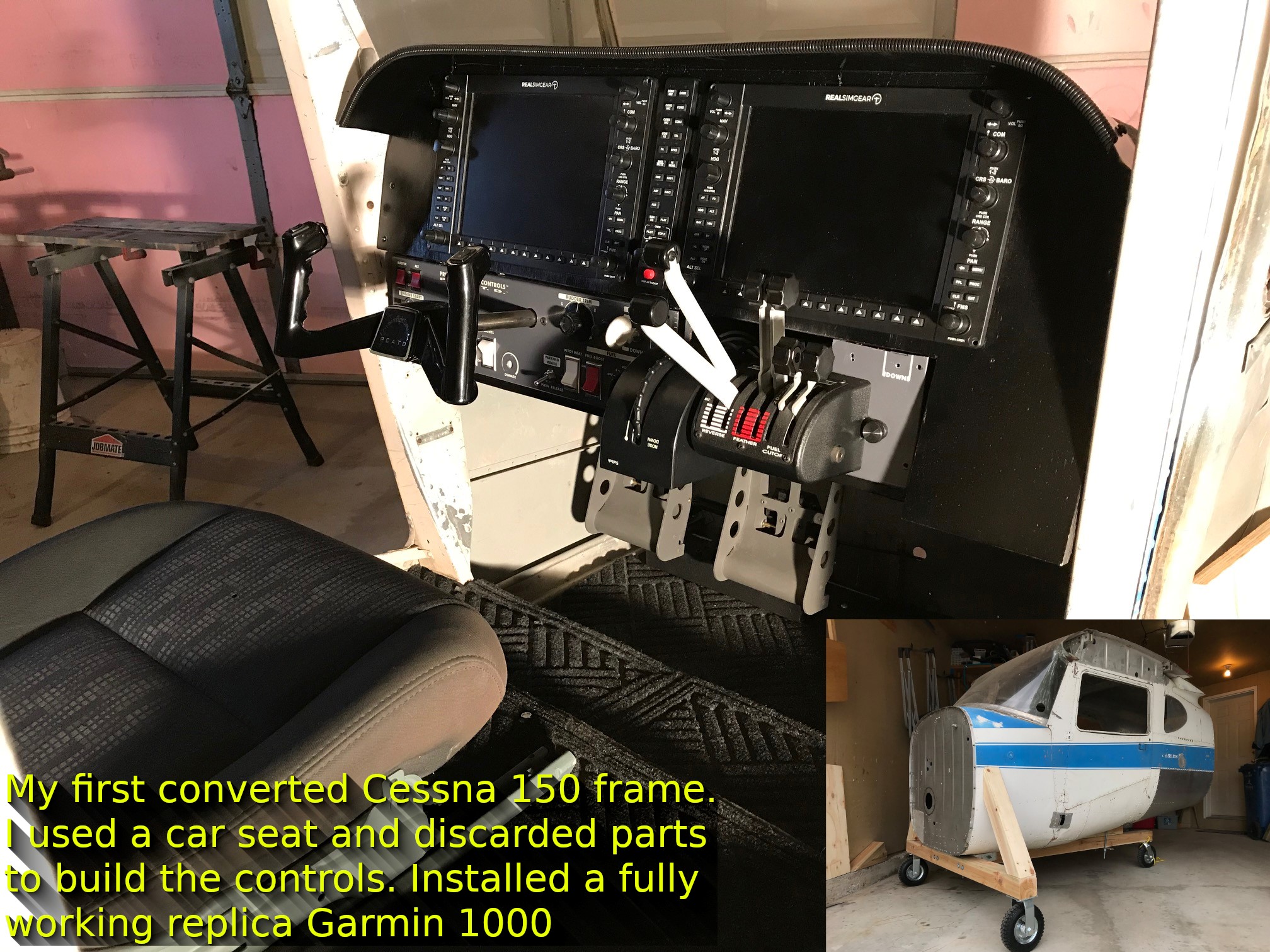 I have met many interesting people during this journey. Business jet pilots, F-18 pilot, GA pilots, 10-year-old kids, and their dads sat in my “pretend” cockpit, and we have shared good times and laughs after bumpy landings or an out-of-control stall.