The name “Brown” is well-known and celebrated in Canadian aviation history. This is due principally to what has been described elsewhere as “The Curious Tale of Two Roy Browns” – Arthur Roy Brown of Carleton Place, Ontario, famous for having played a role in the downing of Manfred von Richthofen (“The Red Baron”), and Francis Roy Brown from Stockton, Manitoba, equally famous military, bush, and test pilot. However, there is a third Brown with a family connection to this story who deserves to be part of the conversation – F. Roy Brown’s younger brother Mannifrank.

A native of Winnipeg, Mannifrank Brown was inspired towards aviation by the example of his older sibling. Like Roy, he embarked on a career as a bush pilot during the late 1920s in northwestern Ontario working for Starratt Airways based in Hudson. Typical of fliers of this era, Mannifrank overcame serious challenges, most notably a near fatal crash taking off from Winnipeg’s Brandon Avenue water-base in February 1933. After being treated at St. Boniface Hospital, he spent part of his recuperation at brother Roy’s home in Lac du Bonnet. The challenges continued after Mannifrank returned to the air with Starratt. In March 1935, pilot Brown and four passengers survived for more than 50 hours after being forced down by the worst blizzard to hit northwestern Ontario in years. A company plane from Hudson rescued the group. During 1936, Brown totaled 1,216 flying hours, a record at the time for the most hours flown by a Canadian bush pilot in one year. This earned him a nomination for the McKee Trophy for outstanding achievement in Canadian aviation. Towards the end of the decade, a promising job prospect with British Overseas Airways Corporation (B.O.A.C.) was pre-empted by the outbreak of World War II.

Although his skills as a bush pilot won him national recognition, it is Mannifrank Brown’s achievements as a member of the RCAF that make his story truly remarkable. Like many bush pilots, Brown joined the air force as a pilot instructor within the British Commonwealth Aircrew Training Plan (BCATP). He began his service at the flight training school in St. Hubert, Quebec, holding the rank of Squadron Leader. It is also known that Brown helped to establish flight schools at a number of other locations including Brandon and Yorkton. His last posting in Canada was to No. 7 Service Flight Training School (SFTS), Fort Macleod, Alberta where he spent 18 months, serving first as Squadron Leader, and then Chief Flying Instructor. In 1942, Brown was put in charge of the Fort MacLeod station holding the rank of Wing Commander. His exceptional training, administrative, organizational, and leadership abilities were evidently recognized at higher echelons. In June 1943 W/C Brown was transferred to the United Kingdom where he became a senior staff officer within the newly established Second Tactical Air Force (2nd TAF).

At this point the story of Mannifrank Brown also becomes the story of RCAF No. 127 Wing, one of three mobile Spitfire Wings within 2nd TAF No. 83 Group destined for forward deployment to temporary airfields (Advance Landing Grounds – ALG) in France immediately after D-Day. Appointed Commanding Officer at the time of its inception in July 1943, W/C Brown oversaw No. 127 Wing’s preparation and training – as well as ongoing combat operations – in England for twelve months preceding the invasion. On D-Day itself, he sailed with the Wing’s advance party to France, going ashore early on the morning of June 7th, 1944, to supervise the building of an ALG near Bazenville. Designated B-2, the airfield was within easy sight of the Normandy beaches. Only a few kilometres from the front lines, B-2 came under fire from German snipers and was attacked several times by enemy airplanes. Known to his RCAF colleagues by the nickname “Father,” Mannifrank Brown served as Station Commander at Bazenville for the first crucial month of No. 127 Wing’s operations in France. Following a change in command in mid-July 1944, he stayed on in France for the duration of the Battle of Normandy.

During his tenure with No. 127 Wing, Mannifrank Brown worked with some of the most highly-decorated and best-known Canadian fighter pilots of World War II – names such as Hodson, McNair, Buckham, Godefroy, Chadburn, Beurling, and others – not to mention legendary British ace James E. “Johnnie” Johnson.

The still little-known story of RCAF Spitfire wings on the ground in Normandy immediately after D-Day has been told in the 1945 National Film Board documentary Wasp Wings. At about the 19:00 minute mark, the astute viewer can even catch a brief glimpse of W/C Mannifrank Brown as part of a RCAF inspection party at a training base in England before the invasion. In September 1944, Brown returned to England and a high-level assignment at RCAF Overseas Headquarters in London. He was posted back to Canada in November 1944 and left the active-service RCAF in April 1945.

At this point, the story of Mannifrank Brown becomes that of family life in Lac du Bonnet, Manitoba, with wife Edythe, daughter Robin, and son Hart. Although he continued to be involved with aviation, Brown’s primary occupation was as owner of the local “Red and White” store (later to become a McLeod’s outlet). Individually and together, Mannifrank and Edythe were active in their community, including municipal and provincial politics. During the late 1940s, Mannifrank served a term on Lac du Bonnet council. In 1953, Edythe made history when she became the town’s Mayor  – the first  woman in Manitoba history to serve in such a position. She would win a second term during local elections of 1957. Having survived the dangerous conditions in Normandy, an ironic twist of fate saw Mannifrank Brown’s life cut short by accident on the icy streets of Winnipeg during the winter of 1959.

In part due to his untimely death, Mannifrank Brown’s story has yet to be told. Look for the Royal Aviation Museum of Western Canada to begin doing so when it opens in 2022. In the Archive Room located on the main floor, you’ll be able to see more incredible artefacts connected to both his bush-pilot and RCAF careers. However, these will be only small part of the aviation treasures to be found there. Be sure to check it out the Archive Room on your first visit.

Although his skills as a bush pilot won him national recognition, it is Mannifrank Brown’s achievements as a member of the RCAF that make his story truly remarkable. 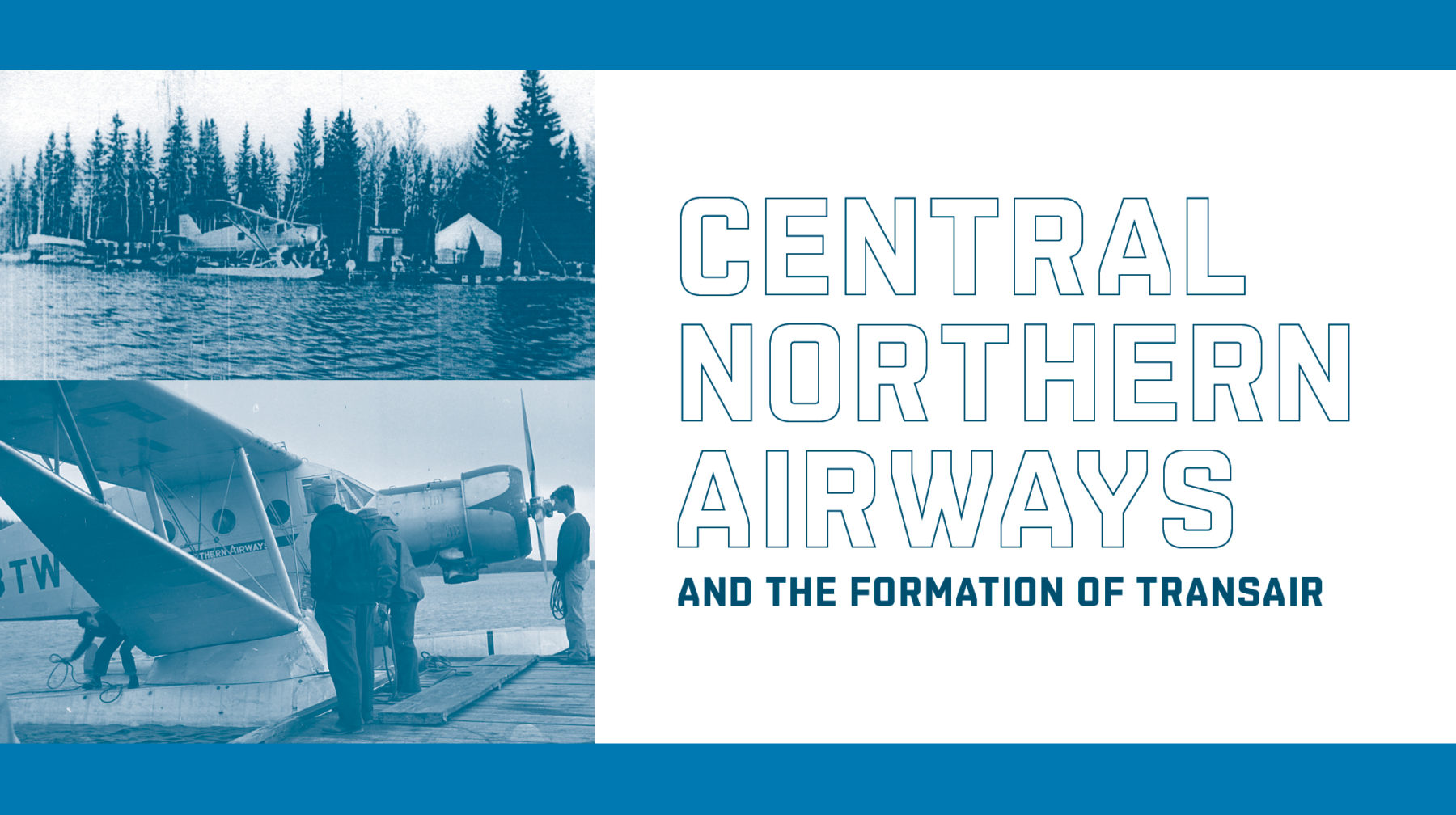 Central Northern Airways and the Formation of Transair

In May 1947, a group of Winnipeg-based businessmen acquired the Canadian Pacific Airlines franchise for routes in Manitoba and northwestern Ontario to establish a new company – Central Northern Airways (C.N.A.). Key names within the C.N.A. ownership circle were E. Milton Ashton and F. Roy Brown, both well-known figures in Canadian flying circles each having …

When Robert Starratt arrived at Hudson, Ontario, with his wife Iris and their children in April 1926, the town was little more than a train station isolated in the forests of northern Ontario.  Gold, tons of it, had been discovered the previous year, locked in the 2.5 billion-year-old rock of the Canadian Shield and thousands …