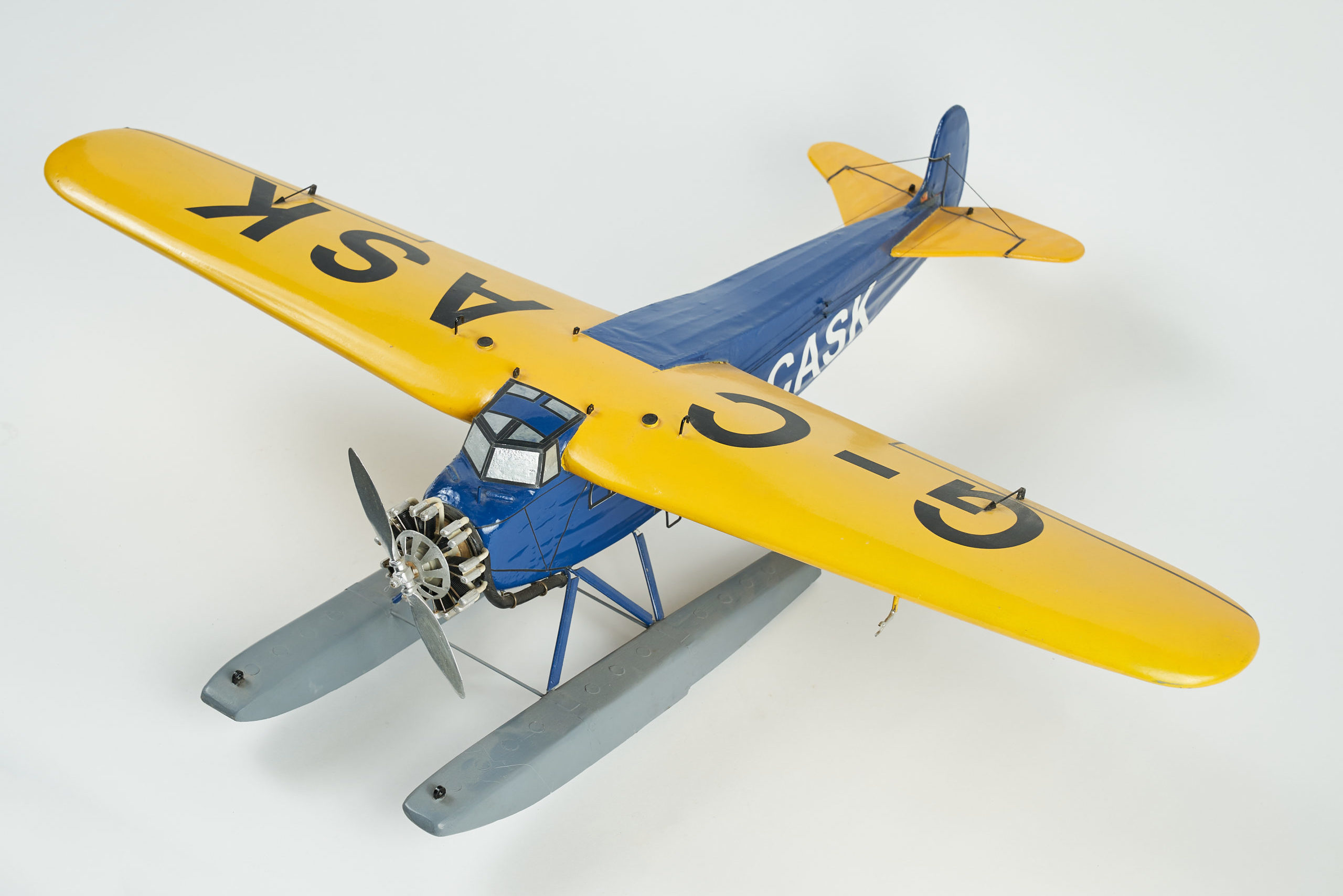 A beautifully detailed model of a Fokker Super Universal. The real G-CASK was registered to Western Canada Airways Ltd. and flown by famed bush pilots Punch Dickins and Walter Gilbert. The first to fly the entire length of the Mackenzie River and over the north magnetic pole, G-CASK was Canada’s most famous airplane of the 1920s.

Regrettably, in 1933, G-CASK perished burned up in a refueling accident at Fort MacMurray, Alberta.

This model immortalizes this history-making airplane for future generations to enjoy. 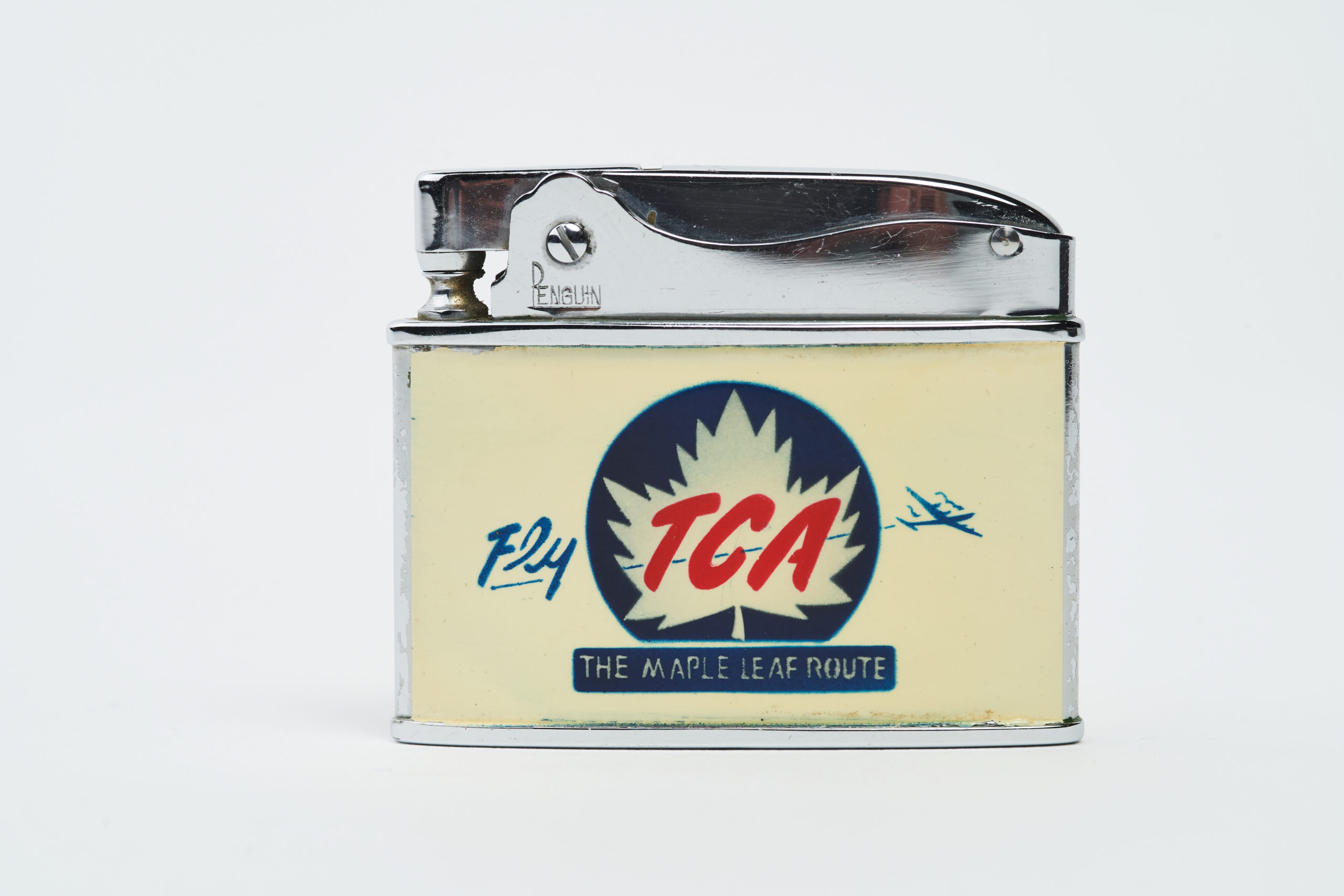 Flying aboard the Vickers Viscount in the 1950s and 60s was a luxury experience for passengers who enjoyed full steak dinners, large windows, and tons of legroom. In that era, smoking was permitted in passenger planes. To promote a relaxing in-flight experience, Trans-Canada Air Lines (TCA) provided complimentary lighters to passengers. 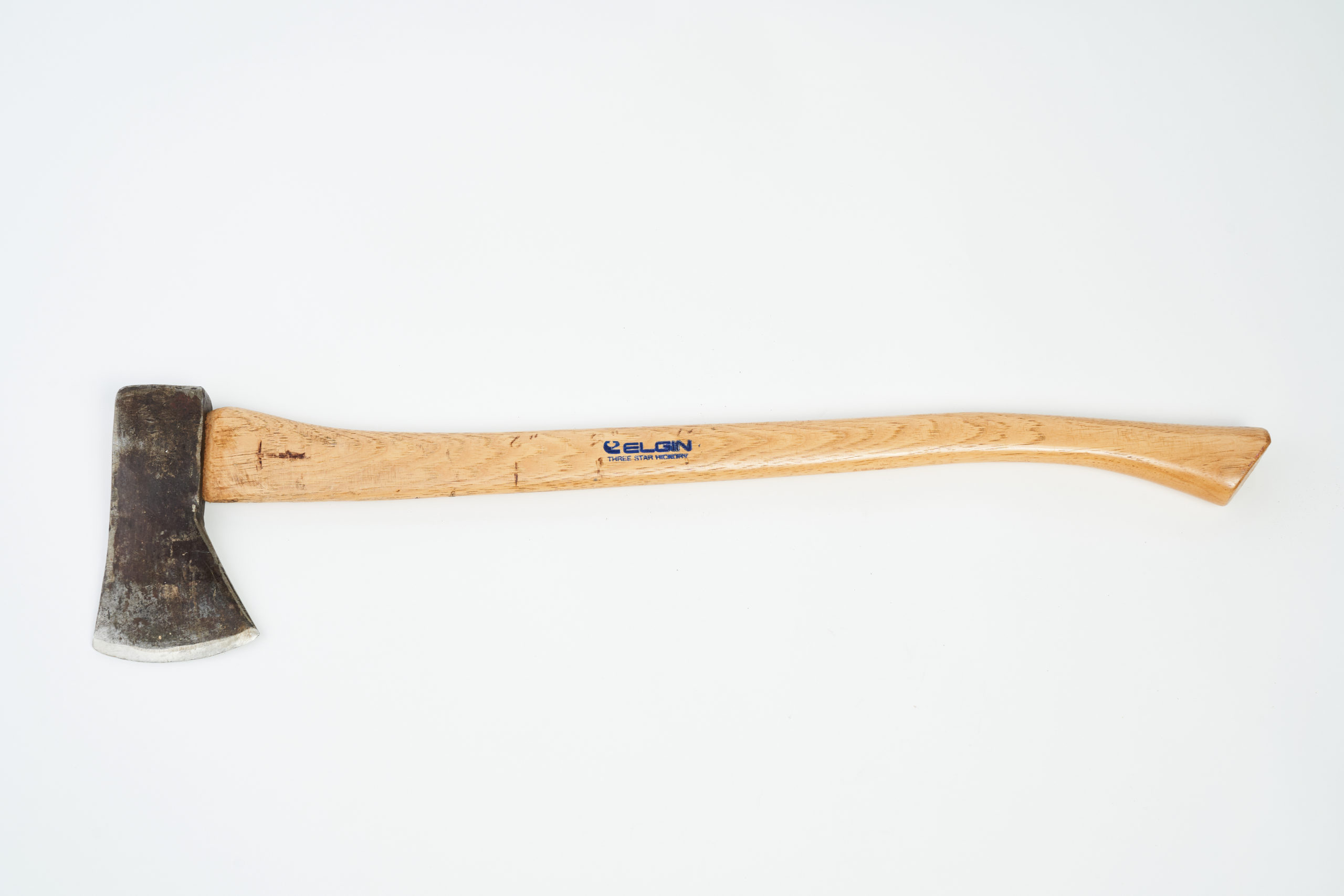 It is common for bush pilots to carry an axe in their airplanes.

An axe could be life-saving, such as when a stranded pilot needs wood to build a fire 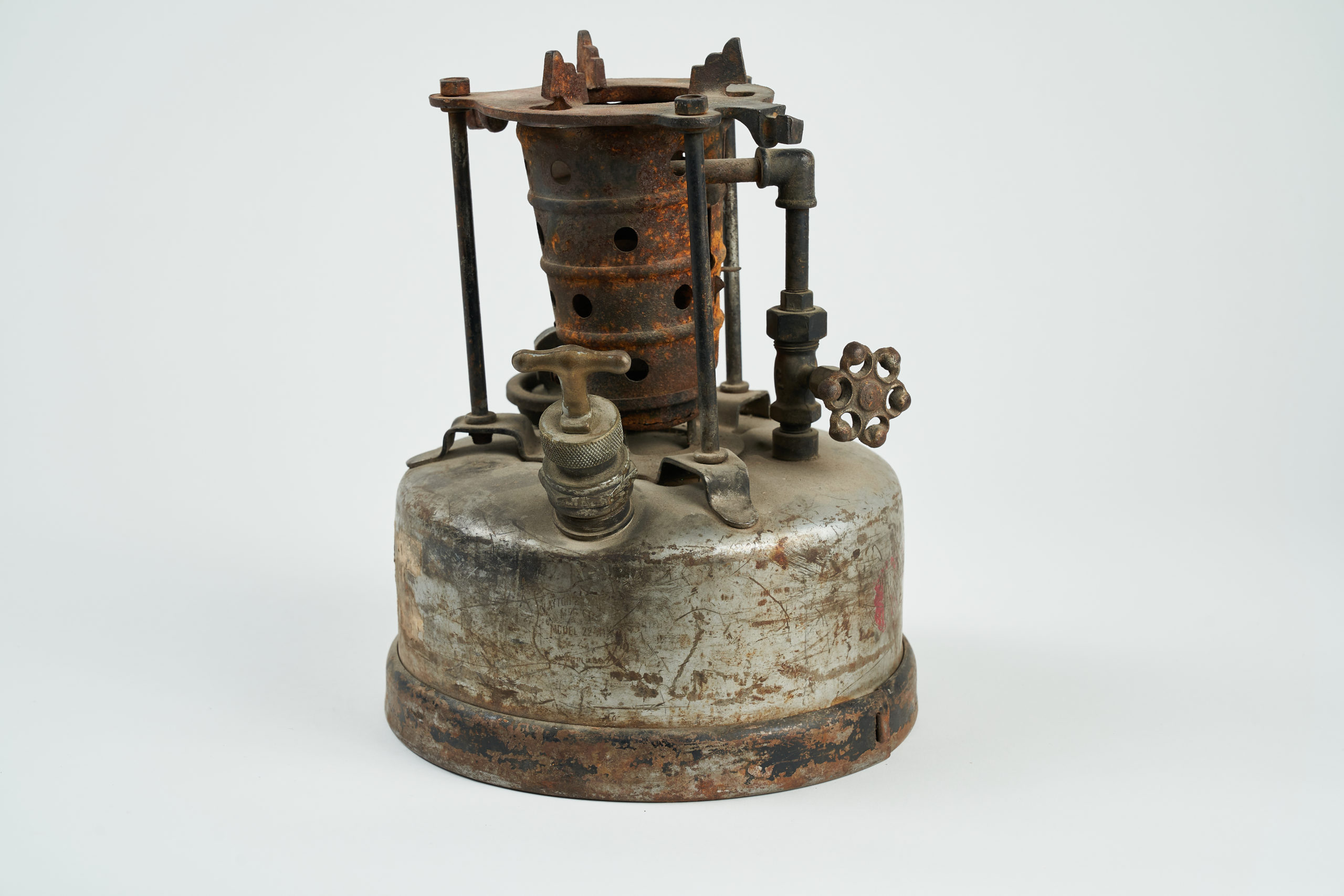 During the 1920s, bush pilots needed to heat the oil in engines on their planes using an open flame torch called a blow pot.

Before take off in subzero temperatures, pilots placed the blow pot under the engine block, then covered the engine with a tarp to trap the heat.

Heating an engine with a blow pot was hazardous, and could take as long as two hours

Bush pilots also took this opportunity to warm themselves! 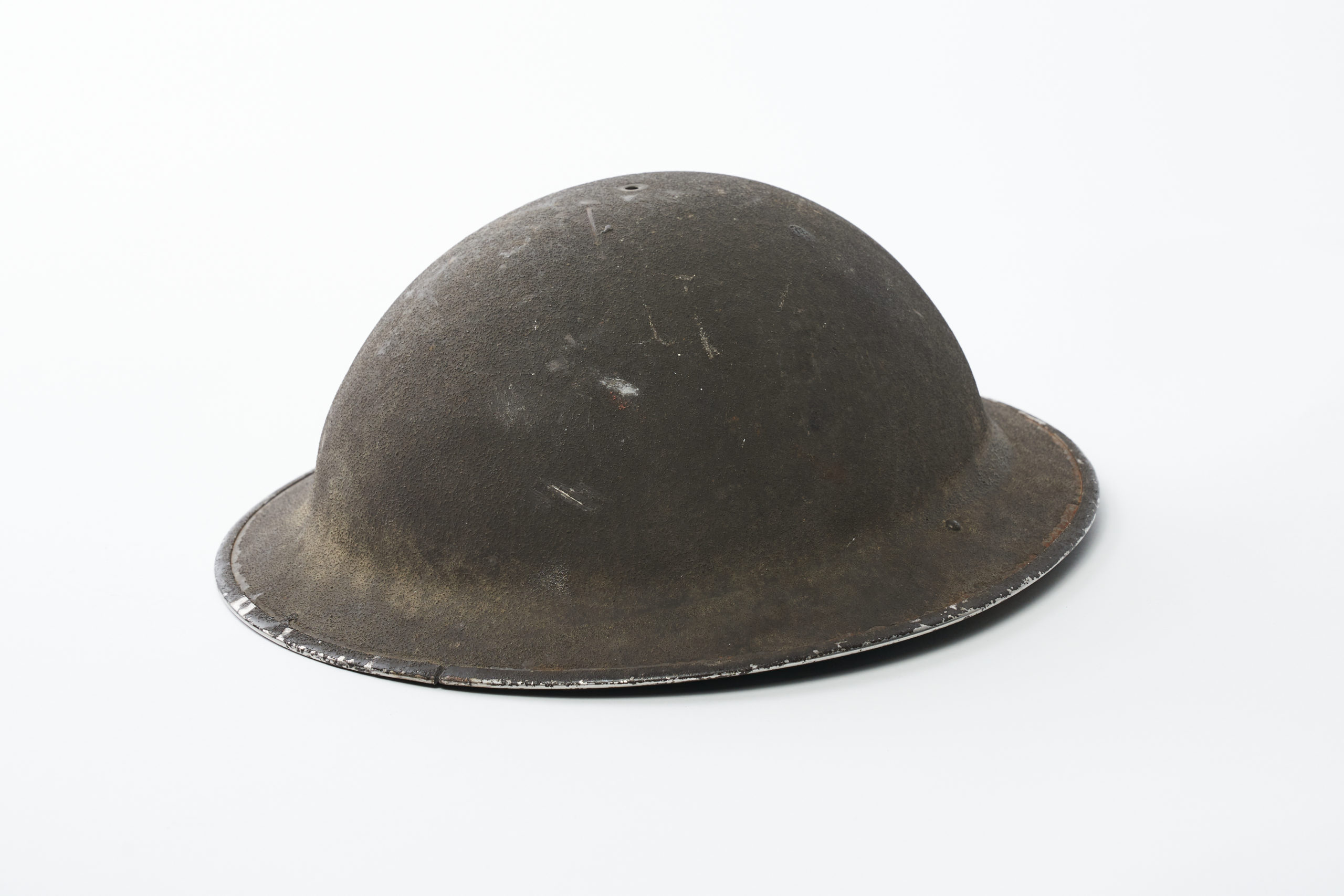 At the start of the Second World War in 1939, Canadian bush pilot Mannifrank Brown enlisted as a flight instructor with the British Commonwealth Air Training Plan. By June 1943, he was transferred overseas as an instructor for the 2nd Tactical Air Force, consisting of British Royal Air Force and Royal Canadian Air Force service people preparing to invade Nazi-occupied France.

To successfully break the German front lines in Normandy and push the enemy out of France, the allies would need to fight both on land and in the air. For Spitfire pilots, the biggest obstacle was the wide English Channel separating Allied airfields in Britain from the battlefields of Normandy. These pilots could only stay in the air over the beaches for about 45 minutes before needing to return to England to refuel. Therefore, it was imperative that the German defensive lines be pushed back enough to establish temporary forward airfields for the campaign to succeed.

On June 6, 1944, Wing Commander Mannifrank Brown led No. 127 Wing advance party in large boats across the Channel. The men carried equipment and materials for constructing an Advanced Landing Ground (ALG) just beyond Juno Beach. One of the Wing’s landing craft containing mostly communications equipment was sunk with casualties by German E-boats during the crossing. W/C Brown helped establish B-2, the first operational allied ALG in Normandy by June 9, 1944.

Before leaving the shores of England on D-Day, June 6, 1944, W/C Brown and the men of No. 127 Wing were assigned a life preserver and overnight pack for the invasion. This standard-issue helmet also protected Brown. 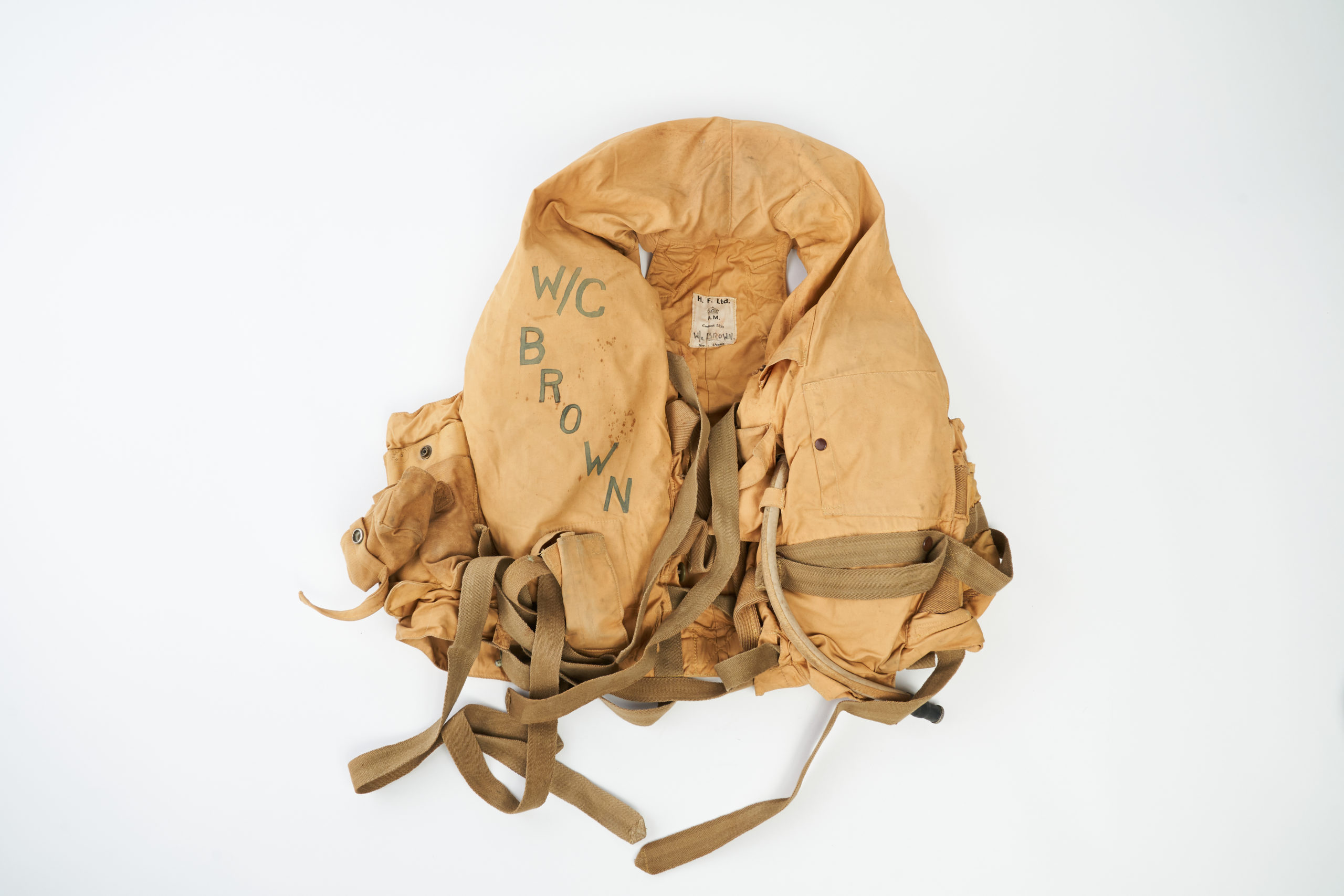 On D-DAY, June 6, 1944, Wing Commander Mannifrank Brown and the men from Royal Canadian Air Force (RCAF) No. 127 Wing received their life preservers before crossing the English Channel towards Juno Beach, on the north coast of France. The life jackets were commonly seen on Allied soldiers during the Second World War and were nicknamed “Mae West” after vaudeville and Broadway actress Mae West.

The RCAF laid two offensives on D-Day, by sea and air. W/C Brown led No. 127 Wing advance party by sea. Once Juno Beach had been taken, his role was to establish a temporary airbase that would provide a landing strip, refuelling, and maintenance for Allied aircraft. He sailed with all of the equipment and materials needed for achieving this task. However, even in the middle of the Channel, the Allies were not safe from the German offensive.

During the crossing No. 127 Wing lost one landing craft containing mostly communications equipment to German E-Boat attacks, which sunk their vessel with casualties. This danger from the underwater attack was just one reason W/C Brown and the 127th received these life preservers.

If you look closely, you can see Mannifrank Brown’s life preserver with his rank and name.